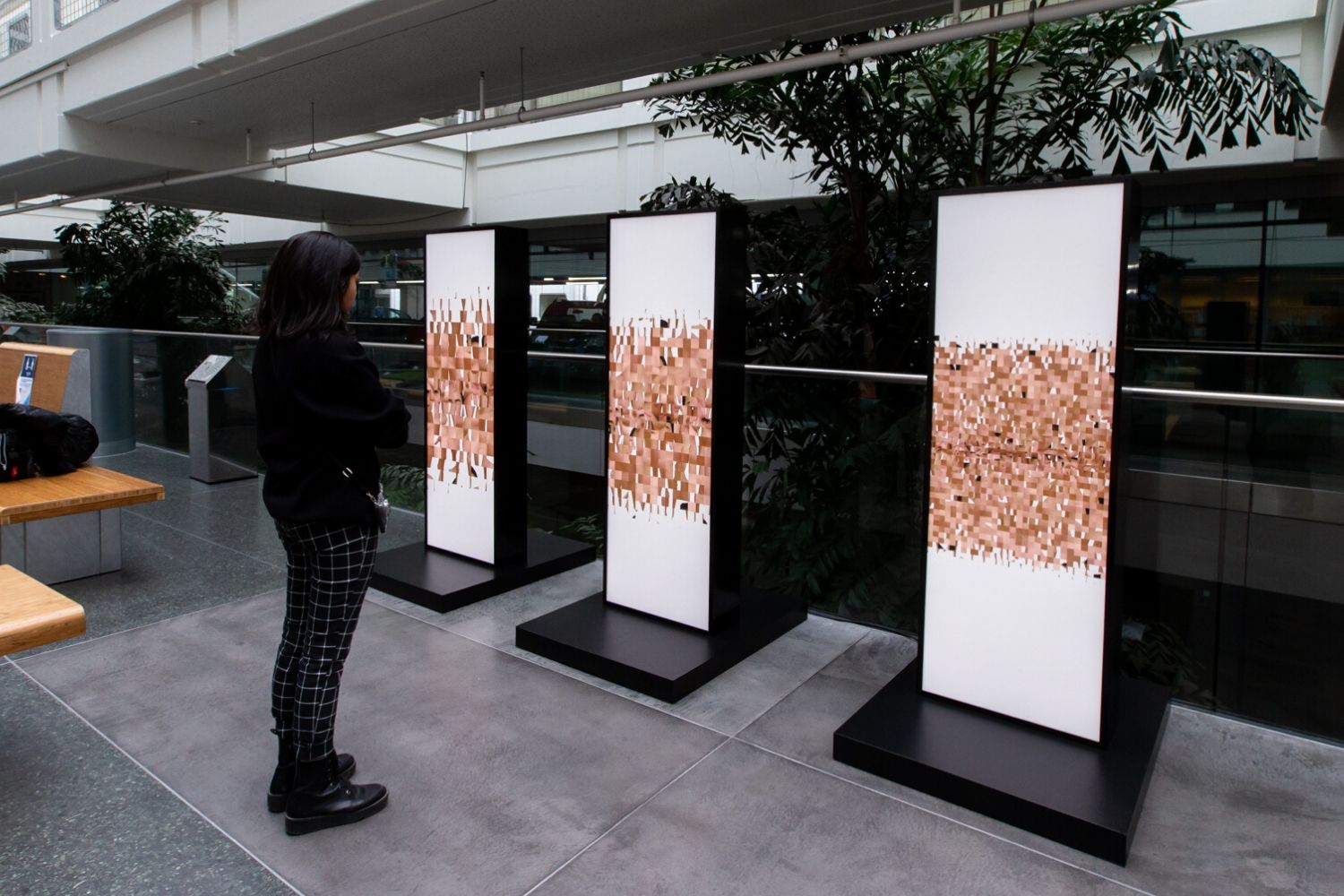 Brains are essentially prediction machines, according to recent arguments by scientists and philosophers. They are bundles of cells that support perception and action by constantly working to match sensory inputs with expectations or predictions. This set of images explores the computational and cognitive eye, as it relates to bodies, vision, cognition, and perception.

Algorithmic Animal Gaze displays images of the artist Ani Liu’s body, subdivided into small square parcels. These squares are organized hierarchically via the Shannon-fano algorithm, which sorts them, from the center outwards, according to how “interesting” they are — or how our gaze and a computer tendto track the body. Fascinatingly, the features the computational eye found interesting ended up being the same features human eyes like to dwell on — eyes, lips, breasts, vulva, fingers, nose.

The three images explore this concept at different levels of parcel resolution, testing the minimum viable feature size in which this algorithm and the human eye maintain their similarities. While the human brain looks for recognizable features — which are lost as parcels get too small to clearly identify an ‘eye’ or ‘nose’, for example — the algorithm only analyzes how predictable the pixels are, from parcel to parcel.

Ani Liu is a research-based artist working at the intersection of art and science. Her work examines the reciprocal relationships between science, technology and their influence on human subjectivity, culture, and identity. Ani’s work has been presented internationally, featured on National Geographic, VICE, Mashable, Gizmodo, TED, Core77, PBS, PCMag, FOX, and WIRED. Her work has been exhibited in festivals, universities, and museums worldwide.

Professor in Radiology and Nuclear Medicin

The work of Ani Liu highlights how critical visualization is to understanding the workings of the body and the mind. My research focuses on visualization of the brain in its greatest detail. As recently as a half a century ago, such information could only be obtained by actually opening the body. With recent advances in science and technology it is now the radiological, rather than the anatomical, imaging that enhances our knowledge of the brain. We can now visualize the brain’s microstructure, tissue perfusion, fiber tracts connecting the various brain regions and even brain function. All this, with a short scan that can be done in any of us without any harm.

Sugar: A Cosmology of Whiteness